Electrostimulation For Snoring and Sleep Apnea 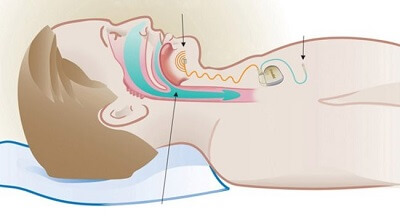 For years, sleep apnea and snoring sufferers have been prescribed a Continuous Positive Airway Pressure (CPAP) machine to treat Obstructive Sleep Apnea (OSA). Some patients do not tolerate CPAP treatment very well and are left with limited options to treat their sleep apnea.

Electrostimulation is a new treatment option that may soon provide relief to sleep apnea sufferers who are CPAP intolerant. This newer treatment is referred to as Upper Airway Stimulation Therapy or UAST.

As the name suggests, targeted electrical impulses are delivered which stimulate the airway to prevent an apneic event from occurring. How exactly does this work?

Before understanding how electrostimulation works, you must first understand the cause of Obstructive Sleep Apnea. As we age, the muscles behind the tongue within the airway lose tone and become weak. This becomes more of an issue for those who are overweight.

While asleep, the tongue and jaw relax which reduces the diameter of the airway, causing a restriction. This restriction does not allow air to travel through the upper airway, to the lungs, and back out. The brain is deprived of oxygen and blood-oxygen levels fall.

The CPAP machine opens the airway using a stream of forced air.

With an electrostimulation device, a sensor is embedded into the chest which monitors breathing. This sensor delivers data to a processor which then sends an electrical impulse to the hypoglossal nerve which leads to the tongue. This surge of electrical energy stimulates the muscle surrounding the airway. This cycle continues with every breath.

The “shock” that’s delivered is not painful and usually goes unnoticed by patients.

A remote control allows the patient to activate the device before going to bed and deactivate it in the morning. A battery within the processor provides power and must be changed out approxmately every 10 years, much like a pacemaker.

A University of Pittsburgh study with 126 patients who were overweight with moderate to moderately severe OSA were studied for a 12 month period while using an implanted device. Participants were selected from across the US with 17% being female and 83% male.

The results, a notable decrease in apneic events was found while using electrical stimulation therapy. During treatment, 68% of those studied experienced a decrease in apnea-hypopnea while 70% saw an increase in their oxygen desaturation index score.

While this study was funded by the manufacturer, it was reviewed by an independent third party.

This study gives hope to those who are CPAP intolerant and are in need of treatment.

CPAP therapy has long been considered the “Gold Standard” for the treatment of sleep apnea and will likely continue to be prescribed for many years to come.

If the patient does not tolerate a CPAP machine very well, Oral Appliance Therapy is sometimes prescribed which uses a custom-made mouthpiece which holds the jaw forward and tightens the airway.

In the event both CPAP therapy and oral appliance therapy both fail, UAST may be prescribed.

While electrostimulation therapy has been studied primarily for the treatment of OSA, snorers may also benefit from the same type of technology.

Snoring and sleep apnea are closely related. The most notable difference between the two has to do with the degree in which the airway becomes restricted. With OSA, the airway often becomes quite restricted. When it comes to snoring an individual will experience airway resistance but the supply of oxygen is not completely stopped as with OSA.

Electrostimulation can help to reduce or eliminate snoring in the same way that it prevents sleep apnea.

Since the procedure is somewhat invasive and can be costly, it’s unlikely that insurance will cover electrostimulation for snorers.

Some over the counter products that deliver an electrical charge to snorers have appeared on the market in recent years. However, you should always proceed with caution if you decide to give one a try. Such devices do not directly target the hypoglossal nerve, have not been studied, and are potentially dangerous.

Next post: Will I Stop Snoring If I Lose Weight?

Previous post: SnoreRx at CVS: Does It Really Stop Snoring Or Is It A Dud?