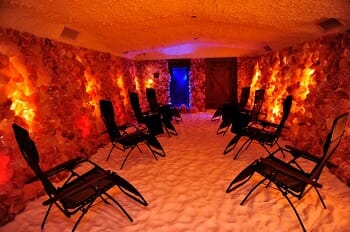 Salt Therapy, also known as Halotherapy (Halo, meaning salt in greek), has been in existence since the 18th century, although it wasn’t until 1843 that Polish physician Feliks Boczkowski made an interesting discovery which popularized this type of therapy.

Nearly a century later during World War II, it was discovered by Karal Hermann Spannagel that injured patients who were hiding in the salt caves to avoid heavy artillery attacks had experienced a noticeable improvement in their health.

When word of the benefits of salt therapy got out, it wasn’t long before the idea offering salt therapy to the public caught on across Europe, Germany and eventually the US. Facilities which mimicked salt caves were created and those who were interested could stop by for a session which costs approximately $40 USD. Today, Halotherapy is touted as a non-invasive drug-free treatment that claims to be a cure-all for many ailments.

The dry salt that is used in therapy is identical to that found in salt mines and is much more concentrated than sea salt that is found in the ocean air. In fact, cave salt is 10x – 15x stronger than sea salt, meaning that a 45-minute session in a salt room is the equivalent of 3 days of sea salt exposure.

Today, there are even machines that can be purchased and used in-home to recreate the same conditions of a salt mine. Machines such as the Salinetherapy Ultrasonic Salinizer, Salin Plus, CrystalLitez, WBM Himalayan Salt Lamp, Saltron, and Salitair can be purchased for $200 or less.

What Are The Health Benefits Of Salt Therapy?

It’s said that the microscopic salt particles offer numerous health benefits. A few of the benefits offered include reducing inflammation in the lungs, thinning out mucus and destroying microorganisms. Dry salt contains 84 elements as well as trace elements that are commonly found in the body.

It’s said that those with allergies, sinus congestion, asthma, bronchitis, snoring and even Chronic Obstructive Pulmonary Disease (COPD) may benefit from halotherapy.

In addition, it can also reduce headaches, stress, improve energy, detoxify the body, and fight off colds.

Those with skin conditions may also see some benefits. While salt can dehydrate skin, it contains other minerals that can rejuvenate skin and help with rashes, acne, psoriasis, and eczema.

Can Salt Therapy Help With Snoring? 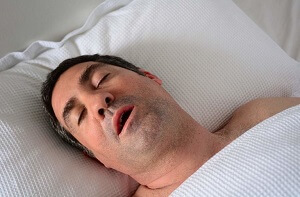 While there are no scientific studies making a direct connection between salt therapy and snoring, the known anti-inflammatory and mucus-thinning properties of Halotherapy could be beneficial to some who have a snoring problem, depending upon the type of snorer they are.

Snoring originates in one of two areas – the throat or nasal passages.

Those who experience snoring due to narrow nasal passages are referred to as nasal snorers. Narrowing can occur for a number of reasons, inflammation due to allergies being one of them.

For nasal snorers, salt therapy can help to relieve congestion and inflammation by moistening the nasal passages while thinning thick mucus.

Mouth snorers, on the other hand, are by far more common than nasal snorers. With mouth snorers, the airway becomes restricted and tissues collide with each other generating the sound of snoring.

In other words, in order to know whether or not you may benefit from Halotherapy, you need to determine which type of snorer you are.

Determining exactly where your snoring originates is not always easy. Here’s a simple test that you can try at home to give you an idea.

Give this a try:

If there is no noticeable difference in sound when holding your jaw forward, there’s a good chance that you are a nasal snorer.

Is Halotherapy Worth Trying?

If you are certain that you are a nasal snorer, it may be worth giving Halotherapy a try.

For most snorers, an oral appliance will be a better choice as it targets the most common area of snoring which is the throat. Here you can find plenty of information on all of the over-the-counter mouthpieces that are available.

As always, consult with your doctor first before trying to treat snoring or any other condition with salt therapy.

Next post: Why Can’t You Hear Your Own Snoring?

Previous post: Will I Stop Snoring If I Lose Weight?