Review of the Pacifier (PAC 100#) Tongue Retention Breathing Night Sleep Aid – How does it compare to the Good Morning Snore?

The Pacifier PAC 100# is a tongue stabilizing device (TSD) that is sold by Koncept Innovators LLC, a Myrtle Beach, South Carolina based company. This product launched in August of 2015.

It’s a one-size-fits-all device that is similar in design to the Good Morning Snore Solution and the aveoTSD. When squeezed and placed on the tip of the tongue, a vacuum is created which draws the tongue into the bulb. A flange rests between the inner portion of the lips and teeth and is used to prevent the Pacifier from slipping further into the mouth. This permits the tongue to remain in the forward position which helps to tighten muscles and tissue in the airway, resulting in a less restricted airway and reduce snoring.

A brief description of this product is given in the instruction manual that is included with the Pacifier. The manufacturer claims that the Pacifier “helps with problems that deal with noisy, constructed breathing… Nighttime breathing noises are caused by the vibration that results in air passing through an obstructed airway”.

According to the manufacturer, the Pacifier was “Developed in the United States by top researchers in the sleep science field”. While such a claim seems rather impressive, the manufacturer offers no further explanation as to exactly who these “researchers” are or what research has been conducted. After a bit of searching, I was unable to locate any credible research to support these claims.

Removing the device is simple.

The pacifier is made from a soft, flexible plastic. While the manufacturer does not specify exactly what it’s made of, it appears to be made from a silicone-like material. As the name suggests, this device resembles a pacifier yet without the nipple. Instead, it has an inverted bulb that is used to hold the tongue in place.

Small slots cut above, below, and on either side of the bulb are believed to be breather holes although due to the placement, they serve little to no purpose. Also, a very small semi-circular piece protrudes from the tip of the bulb which also seems to serve no purpose.

Here are the product specifications :

What Makes the Pacifier Different?

For over two decades, the mandibular advancement device or “MAD” has been the gold standard when it comes to preventing snoring. MAD’s are typically custom fitted at home using a pot of boiling hot water. Once a custom mold has been created, the mouthpiece is placed between the teeth inside of the mouth. The MAD works by holding the jaw forward and opening up the airway thereby preventing tissues in the airway from vibrating against each other. The vibration of airway tissues is often cited as the source of the sound that we know as snoring.

In contrast, TSD’s such as the Pacifier, do not require heating and can be used directly out of the packaging (after being washed of course).  They simply attach to the tip of the tongue and prevent it from falling backward. The tongue stabilizing action also opens the airway and prevents tissues from colliding with each other. One distinct advantage of the TSD is that it can be used by those who wear dentures.

Is it BPA Free and FDA Cleared? 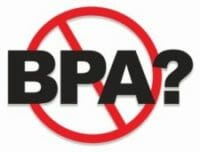 In the US, oral appliances that are used to prevent snoring are considered a class II medical device. Manufacturers who sell such devices are required to have their product “cleared” by the FDA prior to being able to offer it for sale.

The product packaging that I received did not indicate whether or not the Pacifier has been cleared by the FDA. After searching the FDA medical device database, I was unable to locate a product registered as “The Pacifier”.

Also, neither the product packaging nor the company’s website shows the “BPA Free” symbol. However, after publishing this review I was contacted by the manufacturer who informed me that the Pacifier is, in fact, BPA free.

It doesn’t appear that the Pacifier is FDA cleared.

Information on the company’s website as well as the product packaging does not give us any indication as to where this mouthpiece is produced. It’s however believed that the Pacifier is made in China.

The Snore Pacifier can be purchased from the companies website for $29.99 which includes free shipping within the United States.

In comparison to other TSD style mouthpieces, this one is priced significantly less. The Good Morning Snore Solution, it’s the closest competitor, sells for $99.94. 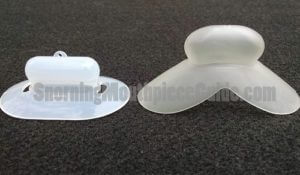 The Good Morning Snore Solution (GMSS) and the Pacifier have several similarities as well as differences.

Both devices are made from a similar silicone material that is soft, pliable, and equally thick.

These two products also share a very similar sized tongue bulb, although each has a slightly different shape.

Both come with a 30-day guarantee and are expected to last up to 1 year.

Where these two differ, is the design and shape of the flange that rests between the gums and teeth. The function of this component is to keep the mouthpiece in place and the tongue in the forward position as you sleep.

The Pacifier flange is fairly flat and contacts a small portion of the teeth and gums at the front of the mouth. In contrast, the GMSS conforms to the shape of the mouth with a “v” shaped flange design that fits closely to the gums and wraps all the way around to the molar area. The flange design of the GMSS gives it a competitive advantage over the Pacifier because it contacts more surface area of the gums which provides a better fit and helps to prevent movement of the device.

My Experience Using the Pacifier 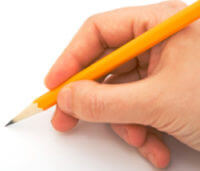 In the past, I have tested two other tongue stabilizing devices with outstanding results. Due to the relatively high price tag of both devices, I was eager to find a less expensive alternative to the tried-and-true Good Morning Snore that I have used for quite some time now. Priced at $30, it’s nearly a quarter of the cost of competing TSD’s.

The Pacifier took about 4 days to arrive and was contained within a clear clamshell retail package. The package contained an informational booklet, the pacifier, and a storage case.

The instructions were fairly complete and included photos of how the device should be used.

I found the plastic storage case to be simple yet functional. This was a nice bonus that did not come with competing products.

As for the mouthpiece, my first observation was that it’s flatter and smaller than the GMSS that I have been accustomed to using for some time now.

After reading over the provided instructions, I cleaned off the Pacifier and affixed it to the end of my tongue. I found the suction power to be equivalent to the GMSS. At this point, I anticipated great results from this product.

The first night that I put it to the test I found it next to my pillow the following morning. At some point during the night, it must have fallen out.

Over the next 7 days that I tried the Pacifier, there were two instances where the mouthpiece fell out at night while I was sleeping. I believe that the flat, non-V shaped flange did not rest flat against my teeth and gums, allowing a loss of suction throughout the night as it worked itself loose.

Overall, I believe that the Pacifier could be a great alternative to the more expensive GMSS if the manufacturer were to make a few design changes to make the flange into more of a V shape to make it similar to the GMSS so that it fits the natural contour of the mouth.