What is Parkinson’s Disease

Parkinson’s is a chronic neurodegenerative disease that attacks neurons located in the brain.  The neurons release a chemical called dopamine which causes the brain to lose control of body movement and function.  The more dopamine is released, the more spastic the body movements become and cannot be controlled.

Noticeable signs of Parkinson’s include:

There currently is not a cure for this disease, however, it can be treated with a range of medicines and surgeries in order to manage the side effects as best as possible.

One of the many side effects of Parkinson’s is interrupted sleep and nighttime disturbances.  Due to the tremors and limb stiffness, it is often difficult for those with Parkinson’s to fall asleep.  These interruptions can also wake you up if you are in the middle of a deep sleep.  Discomfort due to limb rigidity and tremor movements do not help the situation either.  Some medicines can also interrupt sleep and some patients end up getting their days and nights mixed up with certain prescription medicines.

ith Parkinson’s are loud snorers as well, a symptom of sleep apnea.  Sleep apnea and snoring occur when there is an obstruction in the airway.  When air has to find another route around an obstruction, it passes down the throat near the sides of the pharynx next to the fatty mouth tissues.  These tissues start to vibrate as the air hits them and the vibration creates the loud sound of snoring.  Sleep apnea comes into play when your body actually pauses breathing or snoring, and the oxygen flowing into your body and brain become interrupted.  When this happens, you literally stop breathing.  When your body senses this stop, a signal from the brain is sent and you wake up (sometimes unknowingly) and start breathing again, usually with a deep gasp for air or extremely loud snore.  This type of sleep apnea is called obstructive sleep apnea or OSA.

Another type of sleep apnea is known as central sleep apnea.  Central sleep apnea (CSA) is also linked to Parkinson’s disease because unlike an obstruction in the airway in OSA, CSA results in a miscommunication from the brain.  The brain fails to signal the muscles in your respiratory system to breath, thus skipping a breath or multiple breaths.  This is more common in Parkinson’s patients since neurons in the brain are already malfunctioning and producing dopamine.  Scientists relate to sleep apnea with Parkinson’s due to these brain malfunctions, which is why the presence of sleep apnea is so common in the disease.

There are several types of treatments and therapies out there specifically to treat snoring and sleep apnea.  Let’s look at a few options below. 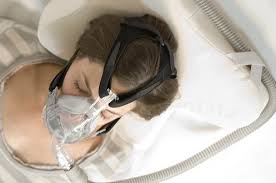 The main treatment for sleep apnea not only for Parkinson’s patients but for the vast majority of sleep apnea sufferers is the use of a CPAP machine.  CPAP stands for continuous positive airway pressure and it is a therapy for treating obstructive sleep apnea.  The CPAP machine is a small lunchbox-sized machine that sits on your nightstand or next to your bed with a series of tubes connected to a face mask.  The person wears the face mask which is attached to a tube where oxygen is being pumped by the machine and into your nose.  The oxygen is pumped by a steady flow consistently throughout the night so that there is no breathing pattern interruption.

Work with your doctor to determine which type of sleep apnea you are experiencing.  Your doctor will administer a sleep study to better understand your sleeping patterns and the extent of the apnea.

There are several snoring treatments available on the market.  Over the counter, products include nasal cones, nasal strips, nasal sprays, essential oils, and night guards.  Prescription based products including snoring mouthpieces and tongue stabilizing devices can also be quite effective.  Surgical procedures like the pillar procedure and a tonsillectomy are also other more invasive options.  It’s important to consult your doctor when deciding on the best snoring solution for you or a loved one with Parkinson’s disease.

Next post: Sleep Apnea – How it’s Linked to Depression

Previous post: Nasal Cone vs Mouthguard – Which One is Better For Snoring?