Nasal Cone vs Mouthguard – Which One is Better For Snoring?

Nasal cones, vents, dilator, clips, no matter what you call them they all serve the same purpose which is to hold your nostrils open to maximize breathing for better sleeping and less snoring. Nasal cones are sold under a variety of names including WoodyKnows, P&J Health, NoseDoze, Turbine, Stanaway, Enshey, Snore Stopper, Mute, Sleep Well, MaxAir, as well several dozen other names. As for price, they can be purchased for as little as $3 and as much as $20.

What’s A Nasal Cone and How Do They Stop Snoring? 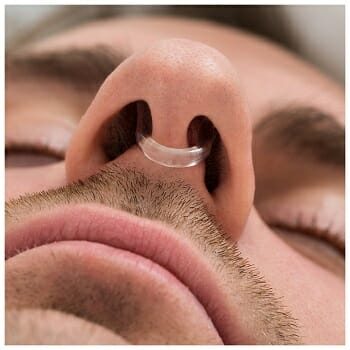 Nasal cones are typically made from a soft plastic or silicone material and are made in a number of different shapes. Some, such as Mute or WoodyKnows is a clip style that fit inside of the nose and is designed with rings that expand the nostril out and open. The advantage of the clip style is that it takes up very little room in the nostril which allows for a greater volume of air to flow unobstructed.

Then there are the basket style vents which are typically cylinder shaped or cone-shaped. These are usually larger in size in comparison to the clip style which can be counterproductive as they consume a bit of space within the nostril and restrict airflow. One advantage of this style of Nasal cone is that they are easy to find and relatively inexpensive.

While there are several reasons why people choose to use nose dilators, the primary use is typical to clear up sinus congestion and prevent snoring by opening the nasal passages.

Snoring often originates in one of two parts of the body, the nasal passage or more commonly, the airway. In some cases, snoring may occur in both the airway and nasal passage.

Nasal passages can become restricted for a number of reasons and when this occurs, snoring sometimes occurs as air is unable to travel without being slowed down. As air attempts to move around swollen air passages, nasal tissue can vibrate which results in the sound of snoring.

What’s A Snoring Mouthguard And How Do They Prevent Snoring? 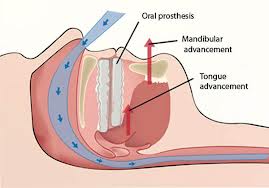 Jaw-retaining mouth guards are the most popular type of mouth guard. They were originally only available from a dentist but several at-home versions have become available in recent years. This type is custom fitted inside of the mouth and sits sandwiched between the upper and lower teeth with the lower tray positioned slightly in front of the upper. While worn in place during sleep, it positions the jaw forward which relieves pressure that’s typically present in the airway. In turn, this helps to open the airway and free it of obstruction. The biggest advantage of the jaw-retaining style of mouthguard is that there are plenty to choose from and they are very effective. As for disadvantages, several are large in size which can make getting used to wearing one challenging.

The other type of mouth guard attaches to the tip of the tongue and works by holding the tongue out and forward while sleeping. This style of mouthguard is not as popular as the jaw-retaining style, although they are becoming increasingly popular.

By holding the tongue forward, the same group of muscles is targeted which reduces any pressure that’s exerted in the airway region, allowing for proper airflow. The advantage of the tongue retaining mouth guards is that a fitting is typically not required and they take up very little room within the mouth. As for disadvantages, tongue soreness may occur within the first few nights of use which typically clears up after a few nights.

Nasal Cones Vs Mouth guards – Which One Works Better? 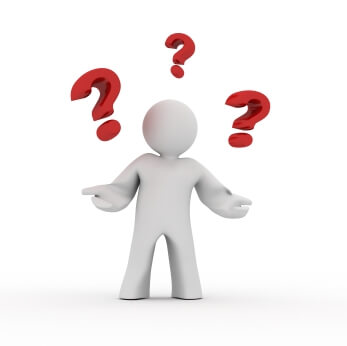 Now that we have an understanding of what Nasal cones and mouth guards are and how they work, let’s get down to the million-dollar question which is ‘which product works better to stop snoring?’, the Nasal cone or mouth guard?

To answer this question with any level of certainty, you will need to know where your snoring originates from. Have you noticed that your snoring occurs only when you are congested such as when you are under the weather but lessens when your congestion clears up?  Are your nasal passages often inflamed and you are unable to breathe freely through your nose? If this is the case, you may be a nasal snorer and nasal cones may effectively reduce your snoring.

On the other hand, if you have always been a snorer and typically don’t experience issues with your sinuses, it’s likely that your snoring originates from the airway and a mouth guard will be helpful.

If you are unable to pinpoint the location of your snoring, a mouth guard will be your best bet as the vast majority of those who snore experience snoring from their airway.

In some cases, snoring can come from both the nose and airway. In this instance, you may want to try using a combination of both Nasal cones and a mouthpiece which will allow for the best chances of success.

Snoring can be a challenging nuisance to treat but by choosing the correct product for the needed application, you can avoid some of the expense and disappointment that many people experience when attempting to solve their snoring problem.

In addition to being a nuisance, snoring can also be an indicator of other health issues such as sleep apnea which is a more serious condition. If you have any doubts when it comes to your snoring, it’s always best to first speak with your doctor who can properly diagnose your condition and suggest a solution which may include either Nasal cones, a mouth guard or a combination of the two.