What Is a Sleep Divorce And How To Avoid One 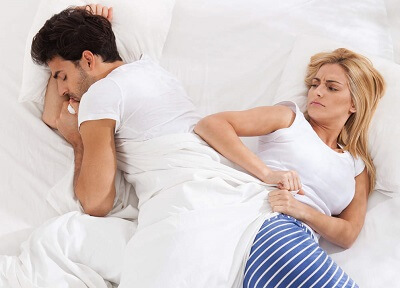 We are a sleep-deprived nation. According to the Center for Disease Control (CDC), 33% of us do not get enough sleep on a nightly basis. That’s 107 million out of 325 sleep-deprived individuals, in the United States.

There are a number of different reasons why we are getting less than 7-8 hours of sleep per night, as recommended by the CDC. Stress, room temperature, sleep disorders, work worries, financial troubles, and children are a few reasons why we fail to get enough shut-eye each night.

One of the most common reasons why married couples are sleep deprived has to do with their bed partner.

Couples often maintain different sleep schedules. Some enjoy staying up at night reading or watching television while others prefer going to bed early.

Snoring is yet another bedroom nuisance that’s more common than you may realize. It’s estimated that up to half of the population has a snoring problem. Snoring is an issue that can keep your partner up all night without you even realizing it.

It’s fairly easy to see how a bedroom partner can disrupt your sleep, but what does one do to reclaim a peaceful night of rest? Some are turning to sleep divorce as a solution, but is that really necessary? What is sleep divorce and how can it be prevented?

What is Sleep Divorce?

“Sleep Divorce” is a term that has been coined to describe separate sleeping arrangements for married couples. In lieu of divorcing their partner due to disruptive sleeping habits, the couple simply agrees to sleep separately so that their partner is not disturbed. 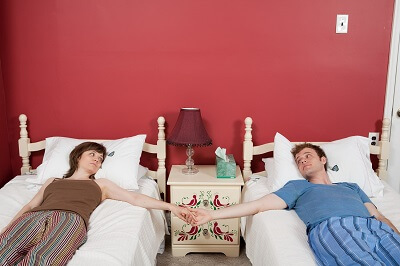 How common is sleep divorce? You may be surprised to hear that an estimated 30% – 40% of couples choose to sleep independently. The reason why this statistic is so startling to some is that most couples who sleep separately often do not openly share this information with others.

While sleep divorce is not accepted as the norm today, it was very common over a century ago when some homes were built with separate sleeping quarters for him and her. Homebuilders today are noticing a trend where buyers are requesting joined master bedrooms.

There are a lot of opinions as to whether or not a sleep divorce is helpful or harmful to a relationship.

On one side of the argument, some believe that doing so will cause you to miss out on pillow talk and intimacy. Then there are those who argue that a sleep divorce will often save a relationship as some peoples’ bad bedroom habits are grounds for an actual divorce.

No matter which side of the argument you are on, most can agree that it’s best to avoid a sleep divorce if possible. How can this be accomplished?

How To Avoid Sleep Divorce

Before you throw in the towel and move to another bedroom, here are a few suggestions that you may want to try.

If you are unable to sleep because your partner snores or moves around too much in bed, there may be an underlying medical issue that needs to be addressed.

Sleep disorders such as Restless Leg Syndrome, Obstructive Sleep Apnea, and Insomnia are just a few issues that may prevent the two of you from sleeping in harmony. Sleep Apnea alone affects over 20 million people with the majority (80%) being undiagnosed. Would you like to guess the number 1 symptom of sleep apnea? Yes, it’s snoring.

Simply taking some time to talk things out and make an agreement may be all that it takes to restore your bedroom zen.

For instance, if your husband is an early riser and you like to sleep in, the two of you can agree that he uses a guest bathroom to get ready in the morning so that you can sleep without being disturbed.

If your partner enjoys watching television or reading at night, ask them if they can watch TV or read in another room and come to bed when they are prepared to sleep.

Maybe your partner goes to bed early and you are a night owl. Perhaps you both can agree on a bedtime somewhere in the middle?

Sometimes, environmental factors along with your partner’s habits can make sleeping next to them unbearable.

For instance, a bed that is too small or of poor quality can be an issue. Have a queen? Consider upgrading to a king. Sleeping on a standard spring mattress? Think about upgrading to a Posturepedic. A new mattress can mean the difference between feeling your partner’s every toss and turn to their movement going unnoticed.

Remove Electronics From The Bedroom

Both you and your partner can benefit from removing electronics from the bedroom such as TVs, phones or tablets.

Several studies have suggested a link between blue light (which emits from such electronic devices) and a disruption in sleep due to the suppression of melatonin.

It’s suggested that you should avoid blue light from screens 2-3 hours prior to falling asleep. If using electronic devices are absolutely necessary, consider blue-blocking glasses which will help to filter out blue light.

A Handy Solution For Snoring

Since snoring is the most common bedroom nuisance, it’s worth mentioning that snoring aids are available that can help.

One of my favorite products is the Snoring Mouthpiece, which is a device that fits inside of the mouth and is incredibly effective. If you want, you can read more here.

Next post: How Blue Light From Phone And Devices Before Bed Is Bad For Sleep