What Is Blue Light And How Does It Effect Sleep? 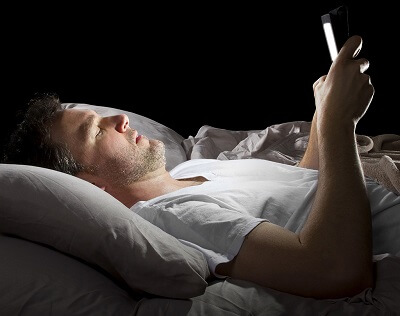 While laying in bed at night, you check your email, Facebook, Instagram, catch up on the latest episode of your favorite TV show or read an e-book. Is there really an issue using light emitting electronic devices before going to bed? Interestingly enough, the answer is “yes”.

Electronic devices such as our smartphones emit short wavelength enriched light. What does this mean and why is it important?

Scientists have been taking a closer look at the effects of blue light on sleep and have found that blue light exposure significantly impacts the sleep-inducing hormone called melatonin. In fact, it delays the production of melatonin more than twice as long as red light which is at the opposite end of the light spectrum.

As a result of blue light exposure, there is a disruption of circadian rhythm which is our internal regulator that cycles through night and day over a 24 hour period. Environmental factors, such as the presence or absence of light, regulate circadian rhythm. At night, our master clock (known as SCN) alerts the brain to produce more melatonin which makes us sleepy.

Blue light exposure at night causes a delay in our ability to fall asleep which reduces the total amount of sleep each night. Once asleep, the lack of melatonin can prevent us from reaching REM sleep, which refreshes and restores our bodies for the next day.

Simply stated, our body uses light to signal that it’s time to get up and do things while the absence of light signals the body that the day is over and it’s time to get some rest. The artificial light that comes from electronic devices tricks the brain into delaying the production of melatonin which in turn keeps us awake longer and prevents deep sleep.

It’s believed that melatonin suppression and lack of sleep can lead to several other issues such as obesity, type II diabetes, depression, and even cancer.

The effects of blue light do not stop there. 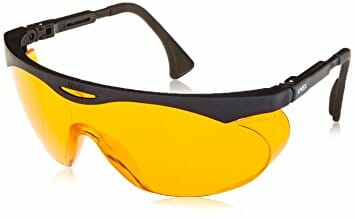 In order to get the best night sleep possible, you should avoid exposure to blue light at least 2-3 hours prior to going to bed. The purpose of a bedroom is for sleeping, not catching up on your social media accounts. Make a habit of leaving your devices in another room to avoid the temptation of picking them up and reading. This also includes electronic readers.

If you must use blue light emitting devices late at night, consider trying a blue light filtering software which will help to reduce your exposure. Most recently made smartphones have such a filter built in, so all you need to do is turn it on. In other cases, you may need to download an app, which is often free.

Try replacing the lightbulbs in your bedroom with ones that are specifically made to reduce blue light wavelengths. LED light bulbs that give off warmer light are available at most hardware stores.

Other ways to reduce blue light exposure is to wear glasses that are specifically designed to block this spectrum of light. There are also filters which can be placed on your screen to reduce exposure. These filters are commonly used on computer screens.

Another way to reduce your exposure to blue light is to take a carotenoid supplement which aids your eyes in the ability to block blue light. Possible supplements may include Zeaxanthin and Lutein, both which can be found at your local drug store.

Should I Completely Avoid Blue Light?

While blue light should be avoided entirely at night, it can actually be helpful during the day, signaling the brain not to produce melatonin. In fact, it’s suggested that a half hour of blue light in the morning can improve alertness and improve memory.

Light exposure during the day is very important. In fact, those with circadian disorders are often prescribed light therapy. Natural sunlight is free and of course is the best source of light. There are also lamps which you place in front of you if sunlight is not available.

Those who live in the northern hemisphere often lack sun exposure which can lead to a circadian disorder, seasonal affective disorder, and even depression. For these people adding light therapy to the daily routine is important.

While light should be avoided at night, you should aim to get enough during the day.

Next post: How Long Does It Take For A Snoring Mouthpiece To Work?

Previous post: What Is a Sleep Divorce And How To Avoid One