Marpac DOHM Classic White Noise Machine Review – Is It Really Worth It?

I receive free products and participate in affiliate programs where I may receive a commission, at no cost to you, if you visit a merchant’s site and make a purchase using links from within this page. 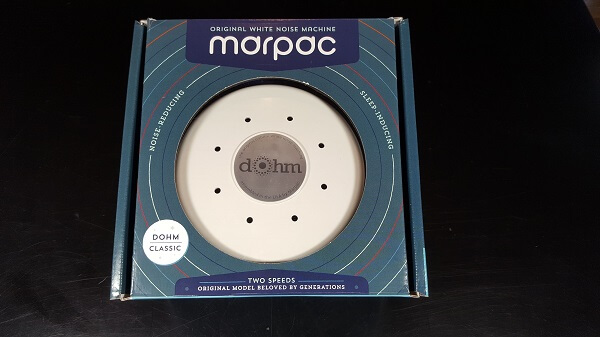 In 1962, Jim Buckwalter created a white noise machine to help his wife who suffered from insomnia.

The idea originated when Jim noticed that his wife, Trudy, seemed to sleep better while traveling and staying the night in a hotel room. After giving it some thought, the couple theorized that the soothing sound of the hotel air conditioner was the reason behind Trudy’s improvement in sleep.

After realizing this, Jim decided to build a machine that replicated the sound produced by the hotel air conditioner. Working in his garage using a few components such as a motorized fan and bowl, he created what would later become the very first white noise machine.

Soon enough, friends and family began asking Jim if he could build a white noise generator for them as well. As you may have guessed, this eventually evolved into the creation of Marpac.

The sound conditioner that is sold by Marpac today operates using the same basic design as years past with a few minor changes to its appearance. 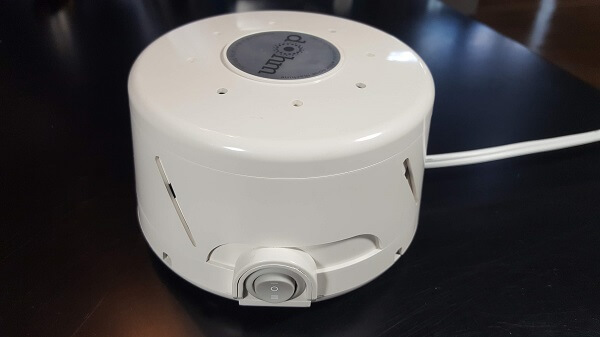 Today, Marpac offers four different types of sound machines including natural sound, multi-sound, baby, and travel. There are a total of eight different models to choose from.

I had the opportunity to review one of their most popular models, the DOHM Classic, which is part of their natural sound machine collection.

The DOHM classic is available in three different colors including black, white, and tan.

This compact unit measures only 5.8″ around by 3.2″ tall which takes up very little space.

The unit plugs into a standard US 120v wall outlet and uses just 18 watts of power which is about the equivalent of one LED light bulb.

Each unit is made in the U.S. in Wilmington, NC and is signed by the factory worker who assembled it.

The Dohm comes with a one-year factory warranty which covers parts and workmanship. 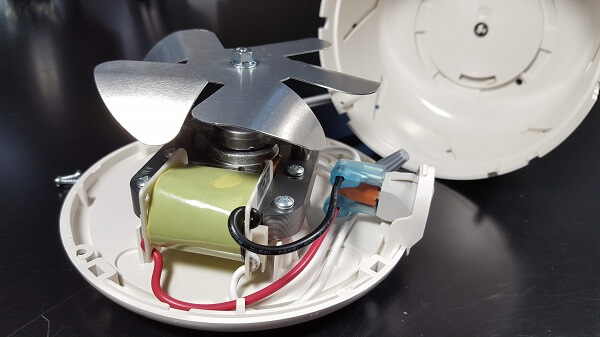 Your curiosity might have you wondering exactly what’s inside the Dohm. I removed the cover to take a peek. Please note, opening the unit will void your warranty and puts you at risk for injury or death. Do not attempt this at home.

As suspected, there’s really not much to this unit. A power cord runs to a switch and then to a motor which has a metal fan attached to it. The fan blades are folded down at a sharp angle which draws air in from the top and forces it downward. The motor inside seems to be of good quality.

Because of the simple design, there are fewer parts that can break which means you should be able to enjoy it for many years before having to replace it.

A toggle switch allows you to adjust the fan speed between “Off” “High” and “Low”. The sound of white noise is generated by a fan that’s controlled by this switch. The high-low settings allow you to adjust the noise level or volume of the unit by increasing the speed of the fan.

Once turned on, the slide adjustments allow you to tune the machine to achieve the desired level of sound.

As you turn the shell clockwise, the opening in which air flows becomes smaller and the sound becomes more muffled. Turning the top of the machine creates a similar effect, although the change in sound is not nearly as dramatic.

This unit is capable of generating a range of sound between 50 – 75 decibels, which is the equivalent of moderate rainfall to traffic noise.

The Dohm did not arrive with any instruction aside from “plug it in”, “turn it on”, and “adjust your sound”. Honestly, this is a very simple device, so further instruction is not necessary.

I adjusted the side holes to my liking and then fine-tuned top holes. It took a few attempts to find a sound that was soothing yet not distracting.

I started off by testing the Dohm in my office where the sound of traffic coming from outside can be quite distracting at times.

I placed the unit next to my office window and turned it on low. I quickly realized that the sound being generated was not quite enough to drown out the traffic noise, so I turned it up to high. At this point, the sound was a bit too loud, so I dialed the machine down a bit to muffle the sound until it reached a balance where I could no longer hear the passing traffic and the white noise was not overly loud.

The gentle whispers of the Dohm allowed me to work for hours without the distractions from outside noise. It also helped to eliminate noise from outside my office door. I found that placing it next to the door is a great way to keep a conversation private from those who pass by.

While having too much noise can be an issue, a room that’s too quiet can be difficult to sleep in. The sound of silence can make falling asleep a challenge and the slightest noise can be startling.

I usually sleep with the fan running, which generates enough noise to allow me to fall asleep. One of the issues with running the fan is that depending on the temperature of my room, I don’t always want the fan blowing on me. The Dohm is the perfect solution for this issue because it allows me to enjoy the sound of air movement but without actually feeling it. As a bonus, it uses less energy than a ceiling fan.

My bedroom is generally very quiet, with the exception of my snoring, which I hear can be very loud at times (more on this in just a second).

I placed the Dohm on my dresser and turned it on low and then adjusted the sound to create a low soothing whisper. I was amazed at how the sound filled the room even with it turned to low.

Once I was settled into bed, it wasn’t long before I was sound asleep. Not only did I fall asleep quickly, I stayed asleep throughout the night which is uncommon.

Dohm Vs My Snoring 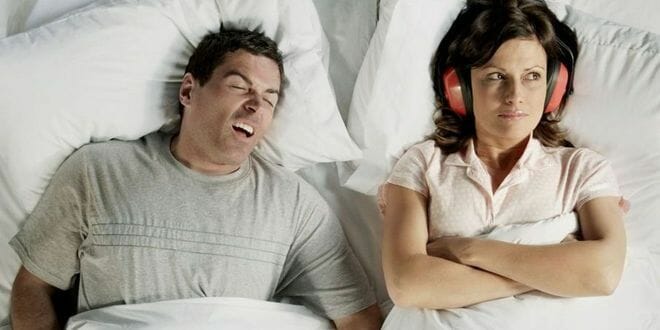 If you are a regular reader of Snoringmouthpieceguide.com, you know that I have a snoring problem. In fact, my snoring actually inspired me to create this blog in a quest to find the perfect snoring mouthpiece. These retainer-like devices can actually completely silence the sound of snoring by addressing the root cause.

In the past, I’ve written about using white noise to neutralize the sound of snoring and have heard from many people who have experienced success using white noise to silence their partner’s snoring. This, however, was my first attempt at using a sound generating machine to combat my snoring.

I positioned the machine on my nightstand and turned it on low before going to bed. I left it up to my wife to adjust the Dohm once I fell asleep.

As expected, the low setting was no match for my loud snoring, so my wife eventually turned the machine up to high and opened the air holes nearly all the way. With the machine cranked up and humming away, the Dohm overcame the sound of my snoring and she was able to fall asleep.

The next day, my wife placed the Dohm on her side of the bed and placed a pillow between us which helped to reduce the noise traveling over to her side of the bed. By doing so, she was able to lower the fan from high to low and still fall asleep without being disturbed by my snoring. The Dohm was a success.

How Much Does It Cost?

The Dohm Classic varies in cost, depending on which retailer you purchase it from. Bed Bath & Beyond and Target currently sell the machine for $49.99 while Walmart sells it for slightly less.

As for the best price, I found that purchasing from the Marpac website is the way to go. They currently sell the Dohm Classic (M1DSUSWH) for $44.95 which includes free FedEx shipping within the United States. Plus, when you purchase directly from Marpac, you can take advantage of their 101-night Trial which allows you to test out the Dohm for 101 nights and return it for a refund if not satisfied. Use the button below to purchase it from Marpac.

Marpac sells three natural sound machines – The Dohm, Dohm Classic, and the Dohm Uno. While the three are similar in appearance, there are subtle differences between each.

While the two are identical in function, there are a couple of differences between the Dohm and the Dohm Classic.

First, the overall textured design of the Dohm is a bit sleeker and more modern. While the Dohm Classic comes in the colors black, white, and tan, the Dohm comes in white with several accent colors as well as charcoal.  Aside from the appearance, the newer version costs $5.00 more.

I speculate that MarPac is phasing out the classic version and moving towards replacing it with the newer one, so if you are interested in the classic, right now is a great time to pick one up.

The Dohm Uno is slightly larger than the classic and features an on/off button with no option for high or low, which will limit your ability to control the sound level. The Uno is only available in white and costs $15 less than the Classic Dohm.

Although there are plenty of white noise machines to choose from, the Dohm Classic is the oldest and most popular machine out there and for good reason.

While other sound machines offer more features than one could ever use, the Dohm provides soothing white noise using a 2-speed fan in lieu of speakers. Because of its mechanical working, it provides smooth, continuous sound without any noticeable loop that can be heard.

The simplicity of the machine and the purity of the sound that’s produced are likely two reasons why the Dohm has been around for so many years.

Before trying the Dohm Classic, I never realized just how useful a white noise machine could be. Now that I own one it’s hard to imagine living without it!

These days, the Dohm remains on my wife’s nightstand and is running every night. I sleep better listening to the sound of soothing white noise while she’s able to fall asleep peacefully without having to hear my snoring.

Aside from bedroom and office use, the Dohm can help children, as well as infants, sleep since white noise can be very soothing. Marpac even has a sound machine that’s specifically designed for babies.

Other suggested uses include:

The Dohm is versatile and can be helpful for anyone who is looking to drown out noise, whether it’s a loud neighbor, traffic, or a husband that snores. The Dohm classic is one product that I can wholeheartedly recommend.
Visit Marpac Website

Next post: Review of VitalSleep snoring solution – Is it really worth the money?